Customer: The National Broadcasting Company YLE
Developer: There Is No Spoon

Donna is a finnish romantic comedy tv-series about a blind young woman who is looking for the love of her life. The Finnish Broadcasting Company YLE wanted to experiment with VR as a storytelling device for expanding the viewer’s understanding of her experience of the world.

A VR experience usually depends a lot on visuality, which created a fascinating challenge for VR startup There Is No Spoon, as visuality had to be re-interpreted for representing blindness in this prototype. Another challenge was that 360 material of the series wasn’t available, so the project needed to use existing flat video material in the virtual environment.

These challenges were solved in There Is No Spoon’s prototype by having the user immersed into a dark environment, where they could only hear a soundscape of a party happening around them. The user has a motion tracked controller in their hand, which they can use to aim and take a snapshot: Doing so triggers a short video sequence from the series that appears in the darkness where the user aimed their controller. The prototype was demoed in the Donna tv-series’ launch event and worked as a launchpad for future VR productions at YLE. 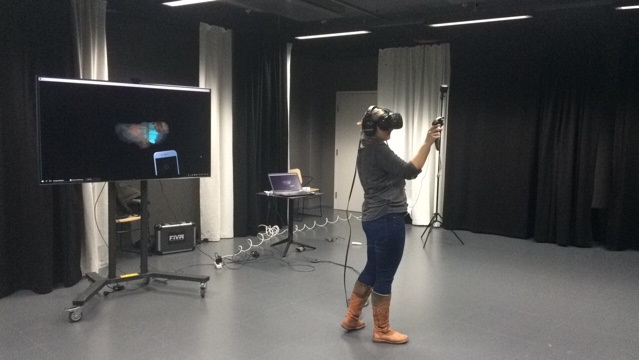